Hi everyone. I’ve sort of recovered from February Eclipses, but here we are at the Full Moon again so the “aha moments” keep coming. Today’s (March 12) Full Moon is in Virgo, a sign representing details, organization, service, wellness, routines, the priestess, our jobs, and discernment, among other things. This Full Moon is a great time to analyze and see what’s what. BUT, it can trigger overly-critical feelings towards ourselves and others. I was recently reminded by a Virgo friend of mine that in zen practice, we are guided to observe without judgement. Instead of saying something is good or bad, we need to simply observe what is happening and what we would like to do to change anything we feel called to change. Sounds simple, but of course it’s not! It can be done, however, and I encourage you to experiment with this mindset.

Now, we are also officially into Venus Retrograde. Venus stationed retrograde at 13 degrees Aries on Saturday, March 4th. When in Aries, Venus has the ability to awaken our anger and ability to stand up for ourselves. Venus Retrograde in Aries points our attention to anger from the past. Mixed in with anger, of course, is passion, ambition, and our motivations. It’s kind of a big fiery mix and Venus can feel a bit out of sorts when expressed in this sign. We’re being called to be a bit self-serving now. We may realize that we’ve been giving away a lot of what we have to offer to others and ignoring ourselves. It will become clear during this time that we’ve got to take care of ourselves. Putting ourselves first can feel unnatural, even for Aries Sun people. For those born with Venus in Aries, I suspect you have a lot to teach others about self love and self care.

On April 2nd, Venus will retrograde back into Pisces. Ah, this one I know! As someone born with Venus in Pisces, I feel I’m working on my PhD in setting healthy boundaries with others. While Venus is Retrograde in Pisces (April 2 – 15), boundaries will be a big theme. In addition, there is a flavor of past life karma, forgiveness, and release. Because we just had the Pisces Solar Eclipse February 26th, I think past life stuff is going to surface during this Venus Retrograde. It could feel like a bit of a foggy time. Don’t expect everything to make sense. DO listen to your intuition, and trust in the unknown. Let go of any old relationship baggage that’s been weighing you down. Remember, right now Venus is in Aries, which should stir up a few things you’ve been angry about. Is that anger really serving you? Can you transform it into something more healing for yourself?

In the midst of all this looking to the past, we have two significant dates representing new beginnings this month. On March 20th, the Sun will move into Aries, signifying the Astrological New Year! Just because we’re in Venus Retrograde doesn’t mean we can’t celebrate another trip around the zodiac. We won’t really be able to help ourselves from feeling excited about the year ahead—probably more excited than we felt in January. The smell of something new just around the corner is already filling the air. A week later, on March 27th, we’ll have our Aries New Moon. I always call the Aries New Moon the second Astrological New Year. It is the most powerful New Moon of the year for setting new intentions. Yet it falls during Venus Retrograde AND the shadow phase of Mercury Retrograde (April 9 – May 3). What kind of cosmic joke is this? I take it to mean we’re being instructed to cultivate patience this year.

There is so much fire energy at work in the current astrology, and that isn’t going to die down until late fall. It’s like the universe has given us all race cars but we need to take some driving lessons. If we don’t manage the speed with which we do things, we could end up crashing and burning. So, I think we got the gift of a big powerful New Moon right in the midst of retrogrades so we can practice using our brakes. We’ll have the potential to accomplish so much this year but this energy needs to be focused and used wisely. Yes, get excited about the potential of what’s coming around the bend. From mid-May through July we’ll be retrograde free and able to punch the gas. But during March and April we need to just do some maintenance and practice our control. 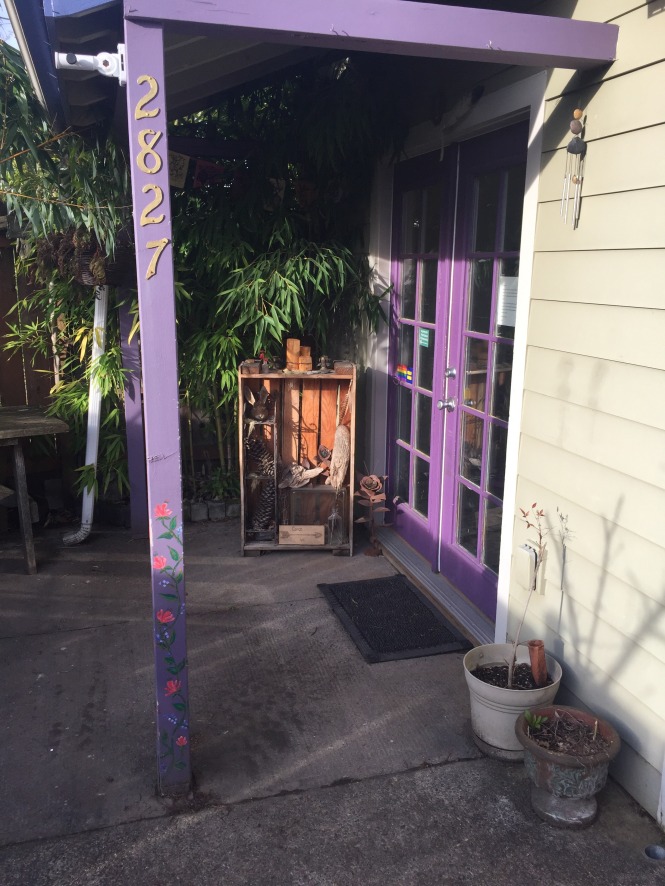 The cottage studio BEHIND Clary Sage Herbarium on Alberta. Come see me during my “office hours” Friday evenings 5:30-7:30pm in April!

For those in Portland, Oregon, I’ve planned some exciting things in April. Just because it’s a double retrograde month, doesn’t mean I’m going to stop my life! These are things I’ve been working on for a while, so I see it as more of a finishing than a starting energy. Starting April 7th, I will be keeping “office hours” in the lovely cottage studio behind Clary Sage Herbarium on NE Alberta St. I’ll put out a sandwich board so you can find me. It’s NOT in the shop, but I do encourage you to shop there as their selection of herbal remedies is amazing. Come see me between 5:30 and 7:30pm on Fridays for either a 15 minute minute mini-reading (drop ins welcome) or an hour-long consultation (book with me in advance). 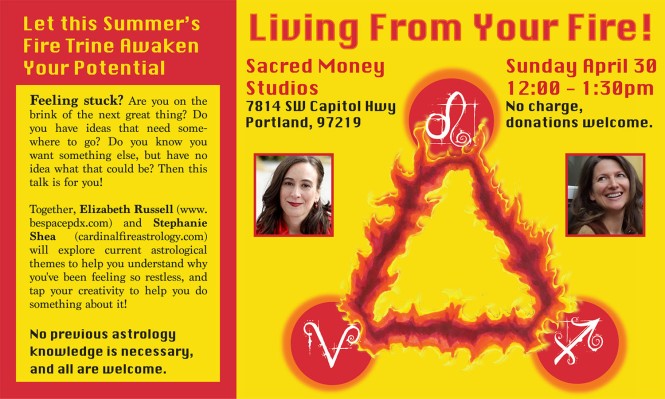 Also, mark your calendar for Sunday, April 30th. Elizabeth Russell (www.bespacepdx.com) and I will be co-presenting a talk on the Astrology of the Fire Grand Trine that will be in full force this Summer. The lecture is free (donations accepted) and will be from noon to 1:30pm at Sacred Money Studios, 7814 SW Capitol Hwy. in Multnomah Village. No astrology experience is necessary. We’re going to focus on the themes, not bog you down with a bunch of astro-lingo. However, for those who want to learn more about astrology, we will be doing a workshop related to this topic that will dive deeper into this and examine its effects in your birth chart.Email me for more details!

In the meantime, take it easy in March. You’re not crazy in thinking big things are coming this year. But we’re not meant to know it all or do it all at this time.